Question:  How long have you been writing?


I’ve been writing for fun since I was a child. It began when I spent most of my spare time writing to 70+ pen pals all over the world in the late 1970s and early 1980s. When I turned 18, I realized that my ‘coming of age’ would be a year of change and growth, and had the foresight to write a journal which proved very useful in the process of writing my memoir (as did other journals I kept on and off over the years). Only a handful of people know that I also used to write long comical rhymes about people I knew! Maybe the less said about that, the better! ;)


In the late 1990s I launched a fan site for a famous singer which involved a good amount of writing and I spent most of my time replying to a constant stream of emails from the singer’s fans.


I worked full time in an office for 28 years where my greatest strength was written communication and I put this to great use.


It was in the mid 2000s when a dear friend introduced me to blogging. At that time, I used to regularly write long emails to friends and family to keep them up to date, much of which was repeated to each of them. It was very time consuming. For convenience more than any other reason, I made a decision to write a regular blog about my day to day life and authorized access to approximately 15 people. Many of those posts detailed my dating escapades. I was in my 40s and desperate to settle down, and as such, I dated regularly. It wasn’t long before three of my readers suggested independently of each other that I should publish my dating posts because they found them so entertaining. This is how my dating memoir "THE MAN IN A HAYSTACK" was born!

Question:  What was the name of the first book you ever published, and when was it published?

Question:  Was this book published by a publisher; or did you self-publish?


It was self-published. I did consider finding a publisher to take a brave gamble on me as a new author, however research established that my manuscript was far too long (and it had already been edited to almost half its original size). That’s when I decided to self-publish, and in doing so I have far more control anyway.

Question:  Tell our readers about this very first book.  (For example:  What was the inspiration for writing it, and what was it about)?


As I said earlier, I was on a dating rampage in my 40s. I was conscious of my biological clock ticking away and my looks beginning to fade; I wanted kids and therefore time was of the essence to find Mr. Right. I made a decision to blog about all of my dating encounters until I found ‘the one’. It involved a lot of men - charmers, players, toy boys, Internet dates, and office romances – think of a type and you’ll probably find him between the pages of "THE MAN IN A HAYSTACK". The title, of course, signifies that searching for Mr. Right is like looking for a needle in a haystack.


This memoir has been described as fun, emotional, heart breaking, honest, graphic and insightful. It provides an honest inside view of the dating world in recent years and how difficult it is to nail the right man. From the feedback I’ve received, it seems to appeal to women of all ages – many women who married young in the 1970s/80s love it because a lot of them barely dated, or they have forgotten what dating was like, and therefore it gives them a fascinating window into that scary world!

Question:  Can a person still buy this book?  If so, where?


Yes, Amazon.com is the best place to buy it. It’s available as a paperback or Kindle eBook. This is the universal link:
http://viewbook.at/themaninahaystack 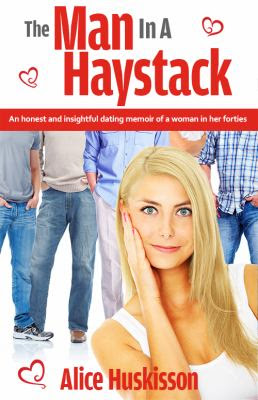 Question:  How many total books have you published?

This is my first and only novel to date.


"THE MAN IN A HAYSTACK"

Question:  Any future writing projects in the works?  If so, tell us about it, and any pertinent dates to go with it.


At the moment, I’m in the process of re-branding "THE MAN IN A HAYSTACK". It was originally marketed as a ‘chick lit’ but it’s been pointed out to me recently that it would be better placed in the memoirs genre. Therefore, I am currently sorting out a much more attractive and appropriate cover design, and concentrating on my blog where I have plans afoot to incorporate the whole dating theme. I’m hoping it will attract more readers and also a lot of people who might want to get involved. It will celebrate the theme of finding your man/woman in a haystack. I’m very excited about it and won’t say any more at this stage as I’m building up to an announcement of sorts on my blog shortly.
Blog: http://alicehuskissonauthor.wordpress.com

Last question, if someone comes across this article and reads it, what would you like to tell them about why you think they should try reading your book or books? (Basically, what can you offer them in the way of information or entertainment)?


If you’re a woman who hasn’t been on the dating scene for a while this book will be most insightful! It will give you an honest and raw ‘experience’ as you follow my dating escapades. If you’re a woman in search of Mr. Right, you will find my story very relatable. Whichever type of men you have dated, you will no doubt find similar between the pages. At the very least you will identify with Mae’s (that’s my name in the story) emotions, feelings and maybe even her actions.


As it was originally written as a blog, I retained the same format for the novel. Therefore, the reading experience is similar to reading a journal and this style makes for an easy and fast paced read. Many have said how addictive it is.


If you’re a man and you’ve always wanted to understand the female psyche, perhaps you’d benefit from this book too. Mae makes some bad choices, but you must ask yourself why? Could it be that her love interest has led her on and then retreated? Have they made promises and not kept them? There’s only one way to find out!


I’d just like to extend my thanks to K.M. Francoeur, the creator of this blog personally. I don’t get many invitations to appear on other authors’ blogs and therefore, I’m thrilled for the opportunity.


If anyone would like to join me somewhere else online, you can do so at:


I look forward to meeting some of you online soon! J
Blog Writer's Note to Author:  It sounds like you wrote a book that I can totally get behind.  As a single lady myself in her early fifties I had to resign myself to the fact that the man I was searching for probably didn't exist.  I'm also happy to say that I am totally fine with that now.  If he does by chance exist, I decided to let him find me, not the other way around.  Anyways, did you ever find your Mr. Right, or do I need to read your book to find this out?  I loved your interview.  Good Luck with this book and any future books you might write.

K.M. Francoeur
Welcome and thank you for visiting my blog site.